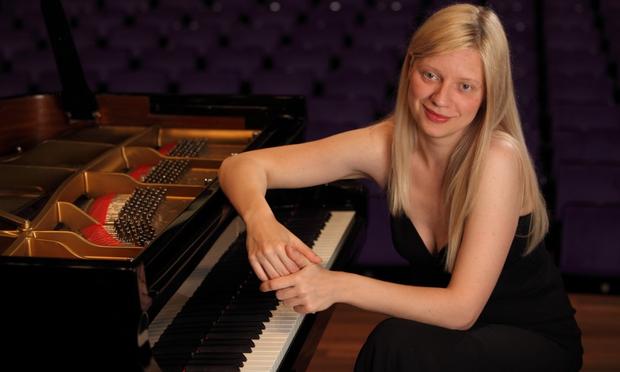 Valentina Lisitsa's latest album showcases the works of Liszt. (Courtesy of the artist)

Valentina Lisitsa, a well-known classical pianist whose Twitter feed regularly features barbed political commentary about the conflict in Ukraine, was dropped from two performances this week with the Toronto Symphony Orchestra, after the ensemble cited concerns over her"deeply offensive" and "provocative" online remarks.

Lisitsa, a Ukrainian-American who was scheduled to perform Rachmaninoff's Piano Concerto No. 2 with the Toronto Symphony (TSO) this Wednesday and Thursday, took to Facebook on Monday to accuse the orchestra of censorship.

"Yes, Toronto Symphony is going TO PAY ME NOT TO PLAY because I exercised the right to free speech," she wrote in a rambling, 1000-word post. "Yes, they will pay my fee but they are going to announce that I will be unable to play and they already found a substitute. And they even threatened me against saying anything about the cause of the cancellation. Seriously."

The pianist accused the orchestra of bowing to a "small but aggressive lobby claiming to represent Ukrainian community," which she said had taken issue with caricatures she posted to Twitter related to the Charlie Hebdo terrorist attacks in Paris.

The Toronto Symphony declined to comment Monday on Lisitsa's charges and issued a statement defending its decision to cancel her contract. "Due to ongoing accusations of deeply offensive language by Ukrainian media outlets, we have decided to replace Valentina Lisitsa," said the orchestra's president and CEO Jeff Melanson.

"Valentina Lisitsa’s provocative comments have overshadowed past performances. As one of Canada’s most important cultural institutions, our priority must remain on being a stage for the world’s great works of music, and not for opinions that some believe to be deeply offensive." The orchestra would not specify which Tweets or other commentary it believed crossed a line.

Since 2010, Lisitsa has maintained a Twitter feed – now under the alias NedoUkrainka – through which she frequently expresses her strong support of Russian-backed separatists in Ukraine. In over 13,000 tweets aimed at more than 9,000 followers, she has posted sharp denunciations ofWestern media and Ukrainian "neo-Nazis" mixed with graphic battlefront videos and images.

Lisitsa, 41, was born in Kiev but moved to the U.S. after the breakup of the Soviet Union in 1991. She launched her career through a YouTube channel, which unlike her Twitter feed, is devoted to performance videos, and which now has received some 43 million visitors. In 2012 she signed a recording contract with Decca.

While frequently described as "the web's favorite pianist," until now, her political commentary has prompted little response by North American concert presenters or audiences. One exception came in October, when a small group of protesters picketed in front of her recital at Heinz Hall in Pittsburgh. She is scheduled to perform later this month in Spokane, WA and Dayton, OH.

Open to: All, detailed results viewable to: All. Participants: 155